“THE MORAL THING TO DO”

“Liberal dementia” likes to take every word and make it subjective; meaning whatever interpretation you have is good, but with a caveat, it has to be their interpretation. 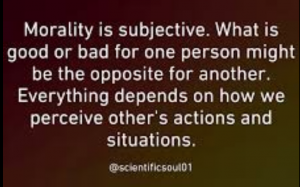 Subjective means you can have an opinion about things you like or don’t like, which lends itself to things like music, books, philosophy and yes politics.  Morality also doesn’t change from generation to generation, though many may many will tell you that what was not acceptable in the past is now acceptable, thus making it moral.  If that were the case then Sodom and Gomorrah would not have been destroyed.

I’ve got a boss, who in our company wide meeting said; “I’ve had the full vaccination but I still wear the mask, because it’s the moral thing to do!”  Morality has nothing to do with wearing a mask when a mask does nothing against viruses (or morality) – they are much to small and just pass easily through the material (any research will tell you this), but it’s a tool for compliance and obedience.   Both my parents are dead and the ONLY one I need to be obedient too is Yahuah the Creator. 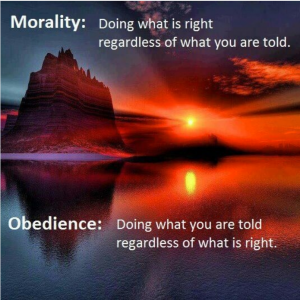 But mask wearing is the liberal mantra these days, thanks to Fauci, who people don’t realize is the one who invented AIDS.  Research it – Dr. Rashid Buttar points out that Dr. Fauci was working on a vaccine in 1981 for an epidemic that did not surface in the population until 1984 – HIV/AIDS. How could he have predicted such an outbreak?  And today he is the liberal media darling and responsible for any and all deaths from the scamdemic Covid 19.

But let’s look at the definition of “MORAL”:

The Cambridge Dictionary defines it as:

Relating to the standards of good or bad behavior, fairness, and honestly that each person believes in, rather than to laws.

Merriam-Webster defines it as:

This definition is far more comprehensive that the Cambridge Dictionary, because you have to determine what is right and wrong.

Wearing a mask or taking an injection has no bearing on anything having to do with being moral!  Fear mongering is what it should be called when people tell you it’s your moral obligation or patriotic duty to wear a mask.  This is the go along to get along mentality that the puppet masters have long been working towards and it also keeps you distracted from the real problems of the world.

The Trump presidency put into place many resources that have been going after child traffickers and you’ll continue to see wins in that arena with arrests and busts.  But the evil of this; is that its tentacles are many and buried deep, that it becomes very easy for those at the top to throw out a few bones to keep people thinking that something is being done.

As for the MORAL thing; The Creator made a list of instructions (since too many people don’t bother to follow them, and in calling them commandments, feel they can just disregard them) that encompassed all that would be the “moral” thing to do:

We’ll bypass the first 4, since Christians don’t even bother with them, well, I take that back – there are the 7th Day Adventist who do keep the Sabbath and the Jewish people, but here are the six:

5:  Respect or honor your Father and Mother so that your days are prolonged upon the soil.  Contrary to what most think, honoring or at least respecting your parents for giving you life, since these days it can be iffy, also shows respect to the Creator.

I ran across this recently and aptly put –it’s a list of pedophiles who became unsealed while we were being distracted- and you can throw in STEALING for taking a child’s innocence, something the creator will not be happy about:

Democratic Illinois State Representative, Keith Farnham, has resigned and was charged with possession of child pornography and has been accused of bragging at an online site about sexually molesting a 6-year-old girl. (Happened in 2014 and died in prison)

Democratic spokesperson for the Arkansas Democratic Party, Harold Moody, Jr, was charged with distribution and possession of child pornography.  (He worked as a special events coordinator for youth services.  You can’t find out if he’s in jail as of 2021 – but it’s Arkansas!)

Democratic Radnor Township Board of Commissioners member, Philip Ahr, resigned from his position after being charged with possession of child pornography and abusing children between 2 and 6 years-old.  (In 2019 he was sentenced to 12 years in prison – pretty loose guidelines for a pedophile.)

Democratic activist and BLM organizer, Charles Wade, was arrested and charged with human trafficking and underage prostitution.  (You didn’t think there weren’t any pedophiles in the BLM did you?  Or in Antifa for that matter!) 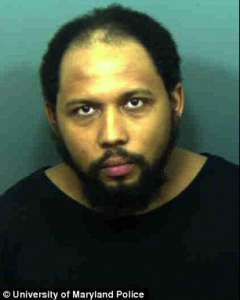 Democratic Texas attorney and activist, Mark Benavides, was charged with having sex with a minor, inducing a child under 18 to have sex and compelling prostitution of at least nine legal clients and possession of child pornography. He was found guilty on six counts of sex trafficking.  (In 2018, he was convicted and sentenced to 80 years in prison!!  Don’t mess with Texas, if you do the crime, you will do the time!)

Democratic Virginia Delegate, Joe Morrissey, was indicted on charges connected to his relationship with a 17-year-old girl and was charged with supervisory indecent liberties with a minor, electronic solicitation of a minor, possession of child pornography and distribution of child pornography.  (Morrissey was in jail, but the outgoing Virginia Governor Northam, decided to pardon him – from one democrat to another.)

Democratic Massachusetts Congressman, Gerry Studds, was censured by the House of Representatives after he admitted to an inappropriate relationship with a 17-year-old.  (All he ended up with was a censure and then he died, but in 2018 they opened up everything about this predator and shared that in a lawsuit.  It’s a shame you have to file a lawsuit to find out these things, but don’t worry, he may have missed judgement on earth, but he will get his!)

Democratic Former Mayor of Clayton, New York, Dale Kenyon, was indicted for sexual acts against a teenager.  (This guy was indicted on 22 counts of 3rd degree criminal sexual acts with a teenager but pleads guilty to 1 count and only gets 6 months home confinement??)

Democratic Former Mayor of Hubbard, Ohio, Richard Keenan, was given a life sentence in jail for raping a 4-year-old girl.  (In 2016 this guy told his wife that a 4-year-old willingly wanted to be raped!  He was sentenced to life but after 10 years he’s eligible for parole.  Not much justice there, wonder what would have happened if this has occurred in Texas?)

Democratic Former Mayor of Winston, Oregon, Kenneth Barrett, was arrested for setting up a meeting to have sex with a 14-year-old girl who turned out to be a police officer.  (In 2017 he got sentenced of 16 months, he was also in trouble for unlawful possession and concealment of a firearm.  Wonder if he planned to take that with him on his outing?)

Democratic Former Mayor of Randolph, Nebraska, Dwayne L. Schutt, was arrested and charged with four counts of felony third-degree sexual assault of a child and one count of intentional child abuse.  (He takes a plea deal and just gets probation!)

Democratic Former Mayor of Dawson, Georgia, Christopher Wright, was indicted on the charges of aggravated child molestation, aggravated sodomy, rape, child molestation and statutory rape of an 11-year-old boy and a 12-year-old girl.  (He may have been the youngest mayor, but didn’t stop him from being a predator.  All he got was 20 years’ worth of  probation and a $1000 fine.)

Democratic Former Mayor of Stockton, California, Anthony Silva, was charged with providing alcohol to young adults during a game of strip poker that included a 16-year-old boy at a camp for underprivileged children run by the mayor.  (Then he went on to embezzle money from the Stockton Boys and Girls club!)

Quite a pattern here if you don’t see it – all DEMOCRATS, sometimes I wonder if “democrat” is really some sort of word for a disease, though I assure you there are many Republicans in this same boat, they just haven’t been caught yet.

But frankly, wouldn’t it be nice if Children could just be children and NOT a commodity to be used for Trafficking, Organ Harvesting and Slave Labor?

Take this headline for example: 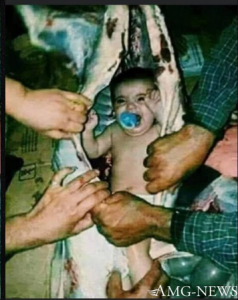 Yes it has reached unimaginable levels and still it continues because we allow it. It really is time we ALL become vigilant about EVERYTHING, especially our children and STOP putting our trust in people who don’t really have our best interests at heart.  Yahuah is really the way and He will guide you as to what to do about what you are seeing in this world of evil.

We need to start making His world a better place for Our children!  Don’t worry about those that do evil, Yahuah will most certainly take care of that.

“Behold!  The day is about to come, burning like an oven, and all the arrogant, prideful and every evildoer will be stubble, like chaff and easily blown by the wind.  The coming day will consume and devour them”, says Yahuah of Hosts.  “It will not leave behind to them root or branch.”

PrevPreviousThe Farce of the Century or the Ghislaine Maxwell Trial
NextTHERE GOES THE JUDGE!!Next

We’d like to welcome you to our site YAH STRUCK, where we are introducing the YAH STRUCK series of books. Though they are fictional, they are based on Child Trafficking as well as real events that have happened, though they are disguised.   But we will be blogging about real events.

Lot of weather events going on around the world that most don't see, we'll keep you updated.